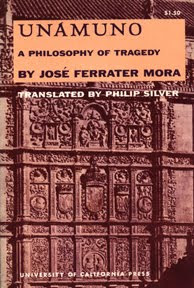 A brilliant summation of the pessimistic yet infinitely humanist and courageous outlook of Spain's greatest philosopher:

Because he manifests a revolt of naturalism against the idealism of reason, and of the idealism of reason against pragmatical materialism, all attempts to pigeonhole Unamuno in one definite philosophical system are bound to fail. Unamuno does not advocate the union—which would entail a reconciliation, and eventually, a truce—of life and reason within the framework of a system where the idea of harmony would forever preclude any discord. There can be no harmony in that war which each human being wages against himself and his antagonists, but only perpetual strife, interminable contradiction, and continual—and fruitful incivility. This is the only "formal principle," if that is the proper name for it, which permeates Unamuno's thinking. It may be stated as follows: To be, is to be against one's self.

Unamuno's emphasis on opposition, tension, and contradiction is obviously related to that type of thinking which since Hegel has been customarily called "dialectical." Nevertheless, there are two important differences between the conventional dialectical systems and Unamuno's.

On the one hand, dialectical systems attempt to describe and explain the attributes of the Cosmos as an impersonal being. In such systems, human reality follows the pattern of the cosmic reality. Sometimes "the Reality" is identified with "God," but even then the impersonal traits prevail over the personal ones. Unamuno's dialectic, however, is of an entirely personal nature. Unamuno refers mainly, if not exclusively, to human existence. And when the ideas of God and world are introduced, they are endowed with human characteristics. Even when he uses such abstract terms as 'reason' and 'the irrational', they are to be understood as embodied in unique, concrete human beings.

On the other hand, all the philosophers who have tried to describe reality as a dialectical process of some sort—Nicholas of Cusa and Giordano Bruno no less than Hegel—have built conceptual systems in which the opposites end in a reunification in the bosom of some ultimate and all-embracing principle. The war between particulars finds peace in the absolute generality of the essential One, so that the principle of identity overcomes, in the end, all contradictions. The dialectical method is one in which as in Hegel—the total, "superior" truth (philosophical truth) reconciles the partial, "inferior" truths (mathematical and historical truth), one which purports to "save" all within the frame of the Absolute—the only realm in which peace is to be found. But in Unamuno's world, animated by the principle of perpetual civil war and unending strife, there is no place for any final harmony and still less, any identity—which would be, in his opinion, the equivalent of death. Among those thinkers who defended the dialectical approach, there was something akin to a headlong rush toward the very identity they denounced, their attempts to dissemble their own longing for an ultimate unity by calling it an "identity of opposites" notwithstanding. In Unamuno there is not the slightest eagerness to be absorbed in this identity, nor the least desire to pour the past into the future; there is just an everlasting will to abide, "to prolong this sweet moment, to sleep in it, and in it become eternal (etemizarse)." Unamuno wishes to prolong his "eternal past" because only the moment most perfectly expresses what he seeks: a sense of being a man of flesh and blood among other men of flesh and blood, yet still longing to be all that one can long to be, to be "all in all and forever," a finite individual and an infinite reality at the same time.

Posted by Fatal Paradox at 12:30 AM No comments: