The Spanish Muslims of Timbuktu 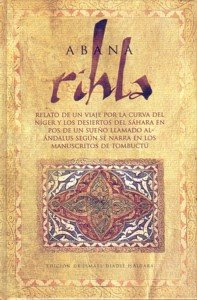 In a comment on my previous post about the expulsion of the moriscos from Spain in the 16th and 17th centuries, Joaquim Pisa (who besides being the author of numerous fictional, travel and poetical works also maintains an excellent Spanish-language blog out of Barcelona entitled Aventura en la tierra) brought to my attention the remarkable story of the Spanish Muslims of Timbuktu.

Joaquim pointed me to the website of the Fundación Mahmud Kati, set up following the "rediscovery" in 1999 in the ancient city of Timbuktu (in Mali, West Africa) of a library of over 3 000 manuscripts literally "splashed" (as the one report put it) with words written in the Aljamiado script. The significance of this find was simply that the Aljamiado script was the same script used by the mudejar inhabitants of Spain to transcribe words in the Romance dialect of Mozarabic, and moreover that the manuscripts found in Timbuktu contained frequent references to the Spanish peninsular.

The collection of manuscripts in question had spent nearly two centuries scattered among various descendants of the great 16th century Timbuktu chronicler Mahmud Kati (himself descended from Spanish Muslims) before being reunited by one of these descendants of Kati - Ismael Diadiè Haïdara.

In the text of a conference paper delivered in Bamako in 2005 entitled "Andalusians in the curve of the Niger" Antonio Llaguno Rojas (vice president of the Fundación Mahmud Kati) recounts the story of how these Spanish mudejares and moriscos - in all but their religion identical to their Christian compatriots - came to reside in such a far-flung, exotic location.

From this account it appears that the first wave of Spanish Muslims who emigrated to the region of the Niger left Spain either before or just after the fall of Granada, thus escaping the vicious religious persecution suffered by their morisco brethren during the Catholic Counter-Reformation.

The reasons for the emigration of these mudejares can be traced back to the period of the Mali Empire and the reign of Musa I, who flourished in the first half of the fourteenth century. Musa was a devout Muslim, and for this reason went to great lengths to persuade the great poets, philosophers and architects of the Muslim cities of Al-Andalus (i.e. Spain) to come and reside at his court. The Sankoré mosque in Timbuktu - constructed by the Andalusian poet and architect Abu Ishaq Es-Saheli as part of a wider complex that also included a library and a university - dates from around this time. 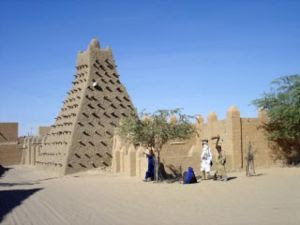 The Sankoré Mosque in Timbuktu


The remarkable thing about the Spanish Muslim presence in the Niger is that it seems to have been largely unaffected by changes in dynastic politics. Thus in 1468 when the Mali Empire was eclipsed by the neighbouring Songhai kingdom, the new ruler of Timbuktu continued to employ scribes and clerics from Al-Andalus as high-ranking civil servants, notably among them the Kati family.

Mahmud Kati, who was a member of the second or third generation of of this family of mudejar emigrants (depending on which sources you believe), compiled not only the fabled library but also the most important historical account of the Songhai Empire and its predecessors - the Tarikh el-Fettach.

Ironically, in 1591 an army of invasion sent by the Sultan of Morocco and led by a morisco general, Yuder Pachá, conquered Timbuktu and overthrew Mahmud Kati's Songhai patrons.

This Yuder Pachá was born into a family of Spanish Muslims in Morocco, banished by the Spanish Crown following the failed Alpujarras uprising of 1568-71. He fought with distinction on the Moroccan side in the Battle of Alcazaquivir in 1578 when a Portuguese-Spanish army of invasion was defeated and the King of Portugal killed (much to the relief of the local Jewish community, who Don Sebastián had promised to put to the knife if they did not convert to Christianity!).

His conquest of Timbuktu for the Sultan, while only temporary, led to the settlement of a second wave of Spanish Muslims (this time moriscos as opposed to mudejares) who subsequently founded their own "empire" (el Imperio de los Armas) which, according to the scant sources I have been able to find on the subject, survived until being overwhelmed by the invasions of Tuareg nomads and French colonialists in the 18th century.
Posted by Fatal Paradox at 2:11 PM