The two souls of Trotskyism? 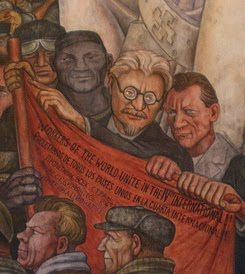 The art of this epoch will be entirely under the influence of revolution. This art needs a new self-consciousness. It is, above all, incompatible with mysticism, whether it be frank, or whether it masquerades as romanticism, because the Revolution starts from the central idea that collective man must become sole master, and that the limits of his power are determined by his knowledge of natural forces and by his capacity to use them. This new art is incompatible with pessimism, with scepticism, and with all other forms of spiritual collapse. It is realistic, active, vitally collectivist, and filled with a limitless creative faith in the Future.

The communist revolution is not afraid of art. It realizes that the role of the artist in a decadent capitalist society is determined by the conflict between the individual and various social forms which are hostile to him. This fact alone, insofar as he is conscious of it, makes the artist the natural ally of revolution. The process of sublimation, which here comes into play, and which psychoanalysis has analyzed, tries to restore the broken equilibrium between the integral “ego” and the outside elements it rejects. This restoration works to the advantage of the “ideal of self,” which marshals against the unbearable present reality all those powers of the interior world, of the “self,” which are common to all men and which are constantly flowering and developing. The need for emancipation felt by the individual spirit has only to follow its natural course to be led to mingle its stream with this primeval necessity: the need for the emancipation of man.

The conception of the writer’s function which the young Marx worked out is worth recalling. “The writer,” he declared, “naturally must take money in order to live and write, but he should not under any circumstances live and write in order to make money. The writer by no means looks at his work as a means. It is an end in itself and so little a means in the eyes of himself and of others that if necessary he sacrifices his existence to the existence of his work....The first condition of the freedom of the press is that it is not a business activity.” It is more than ever fitting to use this statement against those who would regiment intellectual activity in the direction of end foreign to itself, and prescribe, in the guise of so-called “reasons of State,” the themes of art. The free choice of these themes and the absence of all restrictions on the range of his explorations--these are possessions which the artist has a right to claim as inalienable. In the realm of artistic creation, the imagination must escape from all constraint and must, under no pretext, allow itself to be placed under bonds. To those who would urge us, whether for today or for tomorrow, to consent that art should submit to a discipline which we hold to be radically incompatible with its nature, we give a flat refusal, and we repeat our deliberate intention of standing by the formula: complete freedom for art.

Posted by Fatal Paradox at 4:49 PM