St Paul and the imperative of group orthodoxy/infallibility 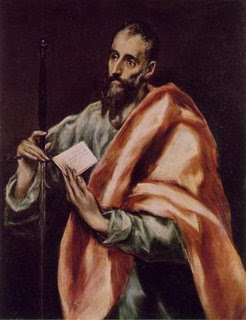 Tying together rather neatly two themes canvassed on this blog recently - intra-left sectarianism and the Spanish writer Juan Goytisolo - I came across this passage in Goytisolo's memoirs recently which I found quite thought-provoking:

The obsession of Communist parties and revolutionary groups with labelling those who differ from them as "lackeys of imperialism" or "agents of the Pentagon" does not date back, as I thought for a time, to the particular historical conditions in which the Marxist and non-Marxist working class movements were shaped and structured before the victory of the Bolshevik revolution: it is a response to a series of social and psychological factors that, as I would be shown by a reading of Blanco White, have their roots through the centuries in notions of orthodoxy, absolutism and infallibility - the fruits of Saint Paul rather than Marx - firmly anchored in human nature. "Individuals organized professionally in an orthodox body will resist and sanction with every means any attempt to dissolve the vital principle behind their union. And as a consistent political body, an orthodox Church will easily realize that nothing binds groups of humans together better than their opposition to the rest...Hence the fact that condemnation of the latter is the real essence of orthodoxy."* A rigidly hierarchical party will thus have recourse, as Blanco prophesies, to the simple expedient of marking out those who are not in communion with them with some vile or sectarian label...

The future designation as "intellectual bourgeois agents," "shameless pseudoleftists," and "minor agents of capitalism" bestowed by the great Cuban leader in 1971 on Sartre and a group of writers politically aligned with him would again confirm the deep-rootedness of the old custom, but I was not then surprised or upset. My involvement in the political world in my first years of hardened self-exile had revealed the abuses of such a mechanism ad nauseam and I was, you might say, inoculated against such terror.

While not necessarily subscribing to the idea that there exists such a thing as abstract "human nature", I think that Goytisolo's observations do contain a real kernel of insight in terms of the way in which inner and intra-group dynamics play out on the political left (as well as in society generally).

While the labels may vary (the Maoists' favorite pejorative being "revisionist" or "objectively counter-revolutionary", the Trotskyists - my own tradition - preferring instead "bourgeois intellectual" or "cliquist") the underlying phenomenon is the same - the need to believe that the project we are all engaged in is objectively vital and representing more than just our own subjective hopes or desires, hence no questioning of its validity can be countenanced.

I remember being puzzled some months ago when reading in the New York Review of Books about a recent work by the French neo-marxist philosopher Alain Badiou entitled "St Paul: the Foundation of Universalism". At the time I wondered why on earth the doyenne of the French New Left would be interested in such an esoteric subject, however upon reflection Badiou's characterisation of St Paul as the Christian equivalent to Lenin does make a great deal of sense. 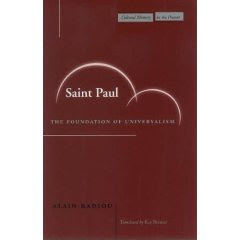 While I admit I haven't read more than the introduction to Badiou's book (such is the impenetrable nature of his prose - like that of French academics in general), his basic contention appears to be that St Paul's role in the history of the Christian church was to place it upon a "universalist" foundation overcoming the various frontiers of language and legal jurisdiction and in so doing creating a new community that transcended the pre-existing multitude of fractured identities (perhaps analogous to the state of the world under global capitalism today).

However quite clearly St Paul's "universalism" is primarily a vehicle to further the propagation of an idea that in its origins and epistemological status is purely subjective i.e. Christianity.

What we can see therefore is that the impulse to "universalise" ideologies or belief-systems often stems from the need to compensate for their tenuous hold on empirical reality (perhaps that is why the Healyites and their latter-day successors the World Socialist Website make such a big deal about the "science" of dialectics - a concept towards which I have always felt fairly dubious)!

This is not necessarily to say that the political ideology of Marxism is only a subjective whim or has no objective basis (although Goytisolo would probably beg to differ) - rather it suggests to me that those political groups within the Marxist left which are the least secure in their foundations are often the most shrill in their denunciations of others (the obvious religious corollary of the WSWS would be the Christian fundamentalists).

In this way I think it is possible to conclude that those groups which feel the need to rationalise the departure of members from their ranks as proving that they have succumbed to defeatism/alien class forces/the devil etc reveal no more than their own intrinsic weakness and insecurity.