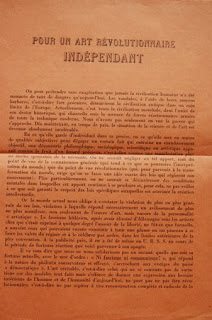 In recent weeks there has been an interesting debate taking place on various left blogs on the question of the relationship between art and revolutionary politics. The debate was initiated by Jared Davidson of the Christchurch Garage Collective in a posting on indymedia provocatively titled "Give up art and save the starving?" which you can find here.

The arguments Jared puts forward (summed up in the statement that "Any artistic practice short of advocating the abolition of capitalism and replacing it with logic, frankly, should be left to die" have drawn heavy criticism from Scott Hamilton over at Reading the Maps as well as from fellow Christchurch-blogger Ross Brighton. Below is my belated foray into the debate, originally posted as a comment on Ross's blog (edited for spelling errors!):
I understand where Jared is coming from in his impatience with the failure of successive artistic movements and artists to mount a challenge to the relations of capitalist exploitation which does not merely end up being co-opted by capitalism itself. However I think he may be expecting too much of art, which in the absence of revolutionary movements in wider society can hardly be expected to bring the system crashing to its knees.

Moreover, in a period of protracted political downturn such as we are living through at the moment (at least in the Anglophone countries) where the basic social and economic conditions that would make an anti-capitalist revolution objectively possible *simply do not exist* it seems to me that "giving up art to save the starving" is not only a counsel of despair, but also accomplishes absolutely nothing in practical terms.

As someone who is currently writing a dissertation on the poets of the Latin American vanguardista movement of the period from roughly 1916-1935 (which was at various points influenced by Cubists such as Apollinaire and Reverdy, the Surrealist school, Futurism and Dadaists such as Tristan Tzara) I have quite a keen interest in the political possibilities and limitations of avant-garde art.

It is certainly true that many of the avant-garde had a fairly exalted idea of the role of the individual artist - the Chilean poet Vicente Huidobro's characterisation of the poet as a "little god" springs to mind - however I do not think this should be read as evidence of some kind of "will to power over" their fellow human beings or denial of their right to participate in the creative process.

Rather they (the vanguardistas) were concerned to assert their autonomy in the face of hegemonic political and literary ideas. While some avant-garde schools (such as the school of creacionismo founded by Huidobro) could be read as containing elitist tendencies, one of the most problematic aspects of the rival surrealist school was its promotion of "automatic writing", based on the idea poetry amounted to nothing more than tapping into the unconscious - an egalitarian idea surely if ever there was one (although it proved to be less than successful!).

But what we should really ask ourselves is how realistic is it to expect art in bourgeois society to escape the social pressures and contradictions inherent in that very same society? Surely you cannot abolish the distinction between artist and non-artist without first overcoming the division in bourgeois society between intellectual and physical labour and between individual and collective consciousness - something which can only happen in a classless, communist society. And to believe that we can expedite this process simply through artists renouncing art nothing more than idealism pure and simple!

Bear in mind too that in the mid-1930s a large number of avant-garde writers (Pablo Neruda, César Vallejo, Louis Aragon for example) renounced their earlier work in accordance with the diktat of Stalin and those in the Comintern who argued that everything (including art) must now be subordinated to the anti-fascist struggle!

However I am sure that even Jared would not claim that this was a progressive move.

In the end I guess it comes back to the question of what is the purpose of art - to express a political message in crude didactic form or to enliven and enrich human experience? I would argue that it is the latter.

This is why I can enjoy the work of a reactionary writer such as (say) Miguel de Unamuno or TS Eliot - because despite their subjective prejudices they still manage to encapsulate in their work some essential facet of that underlying material reality.

The alternative view put forward by Jared - that it is whether or not the artist stands for or against revolution that is the sole arbiter of their work - concedes I feel too much power and status to the individual artist and perpetuates the kind of elitism that he is so keen to avoid in the first place.
Posted by Fatal Paradox at 11:42 PM