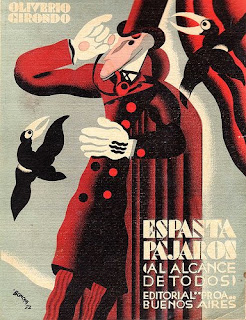 My interest in the Argentine vanguardist poet Oliverio Girondo began after coming across a few months ago - quite by chance - a brilliant film entitled El lado oscuro del corazón (The dark side of the heart), which was Argentina's official entry in the Oscar category for best Foreign Film in 1992.

In the film we see the young protagonist - Oliverio - attempting to live his life in late 20th century Buenos Aires according to his own absurdist manifesto.

He refuses to get a job because, he says, his true vocation is that of a poet. When economic necessity compels him, he goes into the streets reciting poetry (of Girondo, Gelman and Benedetti) to random passers-by in return for money:


He also embarks on an impossible quest to find the ideal woman - but they all ultimately disappoint him since they lack what for Oliverio is the absolutely essential quality, the ability to fly.

In 1932 the original Oliverio (Girondo) rented a funeral coach and horses, and, accompanied by footmen dressed all in black and a giant papier-maché scarecrow, drove through the streets of Buenos Aires selling copies of his new volume of prose poems, Espantapájaros (Scarecrow).

In these poems Girondo reveals the revolutionary yet irreverent aesthetic which led fellow ultraísta Jorge Luis Borges to dub him "the Peter Pan of Argentine literature".