Reasons to be skeptical 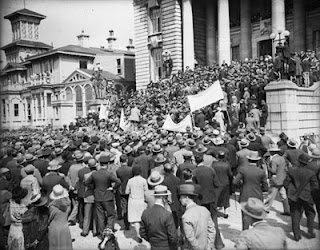 The 1930s historical re-enactment society gets ready to storm parliament
These days it seems everyone on the left is getting terribly excited about the prospect of a "return to the 1930s" in the wake of the current financial crisis - with mass unemployment, labour unrest and political radicalisation.

Alas I tend to think this is a case of frustrated activists projecting their own subjective desires onto reality, rather than anything based in actual fact.

My skepticism has just been reinforced after a visit the blog of NZ's favourite right-wing conspiracy theorist Trevor Loudon where it seems that Trev too is predicting a return to the epoch of wars and revolutions - if only so his paranoid fantasies about communism taking over the world can finally find validation...

Footnote: as I have suggested in a comment posted on Loudon's blog, his fervid postings are in many ways similar to the utterances of Boston Legal's Judge Clark Brown as Trev busies himself reposting stuff from socialist and left wing websites while declaiming in a shocked voice "Outrageous!" "How dare they!"
Posted by Fatal Paradox at 8:51 AM