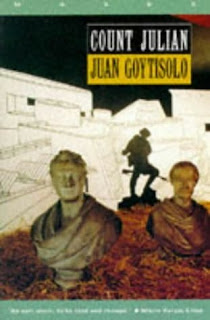 While each nation has had its legendary betrayers in history - the Athenians had Alcibiades, the Romans Coriolanus - arguably none was as spectacularly successful as the Spanish Count Julian.

Count Julian the novel consists of a series of interwoven experiences, childhood memories, dreams and drug-fueled hallucinations of a Spanish exile living in Tangiers who looking across the Straits of Gibraltar that separate him from his homeland is filled with an overwhelming sense of loathing, such that he imagines himself as the great betrayer - Count Julian himself - leading the Arab army of invasion to the sack of Christian Spain.

In their struggle against the Byzantines and the Berbers, the Arab chieftains had greatly extended their African dominions, and as early as the year 682 Uqba had reached the shores of the Atlantic, but he was unable to occupy Tangier, for he was forced to turn back toward the Atlas Mountains by a mysterious person whom the Moslem historians almost always refer to as Ulyan, although his real name was probably Julian, or perhaps Urban or Ulbán or Bulian. Soon thereafter he became a legendary figure known as "Count Julian". We are not certain whether he was a Berber, a Visigoth, or a Byzantine; as a "count" he may have been the ruler of the fortress of Septem, once part of the Visigoth kingdom; or he may have been an exarch or a governor ruling in the name of the Byzantine Empire: or as appears more likely, he may have been a Berber who was the lord and master of the Catholic tribe of Gomera... 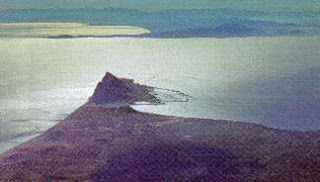 Goytisolo's style takes some getting used to - he avoids the use of full stops and paragraph breaks so that the text appears as one neverending stream-of-consciousness, a kind of Latin Ulysses. The task of the translator Helen Lane in handling this work is therefore one that cannot be underestimated.

Many of Goytisolo's own personal experiences are blended into the narrative - mainly scenes of human cruelty from his childhood spent in 1940s Francoist Spain which also resurface in his memoirs. However despite sharing many aspects of his personality and background (up to and including his self-imposed exile in Morocco) with Goytisolo, the nameless protagonist represents an extension beyond Goytisolo the writer. For example as our exiled Spaniard delights in fantasies of sexual violence perpetrated by the Arab armies he imagines overrunning Spain, it is clear that he is channeling the Marquis de Sade, while at other points in the narrative he seems in equal parts José de Espronceda and Miguel de Cervantes.

The protagonist desires the complete destruction of Spain - physical, political, linguistic and literary. He imagines a variety of ways in which this destructive intent can be encompassed - ranging from the fanciful (ordering the removal from the Spanish language of all words of Arabic etymology) to the truly bizarre (contracting rabies and donating his blood to be used in Spanish hospitals).

He fulminates not only against the Francoist dictatorship but the entire Spanish weltanschauung, symbolised for him by the Roman stoic philosopher Seneca (who we are reminded Nietzsche called "the torreador of virtue) and who our protagonist imagines was not born in Corduba as the historical accounts maintain (which would open him up to the suspicion that he was not of "pura sangre") but rather in the very heart of Castille, in the village of Madrigal de las Altas Torres - the birthplace of Queen Isabella "the Catholic" located in the Sierra de Gredos mountains.

The weary fatalism that he perceives in the Spanish collective psyche is further underlined by the frequent jibes at the figure of Platero, the donkey in the poem by Juan Ramón Jiménez who exhibited an enormous capacity for blind, trusting faith (a positive quality for Jiménez, obviously not so for the protagonist who imagines meeting the inoffensive creature and slitting its throat with a knife).

Elsewhere in the novel the Spanish obsession with racial purity is represented by the continuous praising of the Castillian ibex or capra hispanica by Don Álvaro Peranzules (an obvious caricature of General Franco). Yet the protagonist also feels nothing but contempt for the erstwhile progressive Spanish intellectuals, the partisans of racio-vitalismo and heirs of Unamuno and Ortega y Gasset who claim to oppose Franco:

at literary gatherings and cocktail parties, in arty cafés and elegant salons, men of letters are carefully tending the flame of the brightly glowing Torch of Generations: sons, grandsons, great-grandsons of the giants of '98, bards celebrating the immutable flora of the steppes, the Hispanic essence that has stood the test of centuries: statues who do not yet have a pedestal, but are already masters of the art of tauromachic pedestal...
Of course, these same intellectuals during the Spanish Civil War delighted in stoking the fires of patriotic nationalism against the colonial Moroccan troops used by General Franco and the Nationalists - demonising the alien other instead of seeing them as a people oppressed by Spanish imperialism who could potentially won to the Republican cause.

However in the final analysis Count Julian is not just a Spanish story but a universal one - as the protagonist tells us:

one's homeland is the mother of all vices: in order to be cured of it as rapidly and completely as possible, the best remedy is selling it, betraying it: selling it?: for a mess of potage or for all of Peru, for a great deal or for almost nothing: to whom?: to the highest bidder: or giving it, as a gift filled with poison, to someone who knows nothing about it and does not care to know anything: a rich man or a poor one, a man who is indifferent or one hopelessly in love: for one simple but sufficient reason: the pleasure of betraying...what homeland?: all of them: those of the past, the present, and the future...selling one's homeland into bondage, an endless chain of sales...an unending crime, permanent and active betrayal...
It is this fundamentally irrational yet somehow heroic (or anti-heroic?) sentiment which I think makes Count Julian such a powerful work - worthy of comparison with Christopher Marlowe's Tamburlaine the Great or Milton's Paradise Lost.

Together these works could form the basis perhaps for a course to be taken in conjunction with all the papers on nationalism and "nation-building" that currently infest our institutions of higher learning, to be entitled "Anti-Patriotism 101".