The Other Count Julian 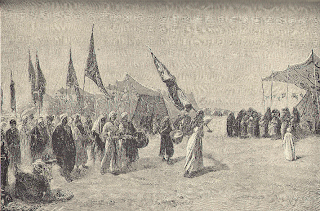 It is funny how sometimes a line or fragment of a poem can lead you off on the most circuitous yet interesting of intellectual tangents.

I had this experience a couple of years ago when I was reading the through some of the Civil War poetry of Antonio Machado - the Spanish modernist writer and contemporary of Unamuno and Azorín - and came across a sonnet entitled "A Otro Conde Don Julian" ("to the other Count Julian").
The poem itself, which is far inferior to Machado's earlier works such as those found in his collection Campos de Castilla (Lands of Castile) and of primarily propagandistic rather than literary significance, held little interest to me - but the title, which casts the nationalist leader General Franco in the role of the arch-betrayer of Spanish history Count Julian of Ceuta held a strange fascination.

My knowledge of the half legendary, half historical figure of Count Julian was derived from my early-adolescent reading of Walter Scott's "The Vision of Don Roderick" which with Scott's customary poetic licence recounts the story of the last Visigothic King of Spain and his defeat at the hands of the Moorish invaders (Sir Walter Scott, along with the Romances of King Arthur and Charlemagne, informed most of my 12-year-old world view).

In the poetic account of the fall of Visigothic Spain, King Roderic is betrayed by Count Julian, the governor of the Christian outpost of Ceuta which lies on the North African coastline at the closest point to the Spanish shore (the Romans knew it as the city of Septem). The reasons suggested for Julian's betrayal are many and varied - some say it was because Roderic raped one of Julian's daughters who was a hostage at the Visigothic Court in Toledo, others that Julian was the protector of the sons of the previous Visigothic King Wittiza, whom Roderic was suspected of assassinating.

More recently, historians have suggested that Julian may have been a Byzantine Greek official who had only entered into a temporary alliance with the Visigoths after the fall of Carthage to the Umayyads in 695-698 and the departure of the last Roman troops. Given the fact that the Umayyads proved to be considerably more tolerant towards other religions and denominations than the formerly Arian Visigothic rulers (who with the zeal of recent converts to the one true faith were continually trying to prove their Catholic bona fides to the Pope by violently persecuting Jews and heretics) it is not inconceivable that Julian's decision to enter into an alliance with Musa ibn-Nusair, the Umayyad governor of the newly conquered Maghreb provinces was motivated simply by enlightened self-interest.

Whichever of these scenarios is correct, what is uncontested is that in the year 711 Julian provided the fleet which transported the Berber Umayyad general Tariq ibn-Ziyad and his troops across the narrow straits to the landing place which now bears Tariq's name - the Rock of Gibraltrar (from the Arabic "Jabal Tariq"), echoing the invasion of Republican Spain by General Franco at the head of the Army of Morocco in August 1936, some 1200 years later.

After the defeat of Roderic at the Battle of Gaudalete and the establishment of Umayyad rule in Spain, Julian was rewarded for his "act of treachery" with extensive lands and titles.

These then were some of the literary and historical associations that Antonio Machado's piece of Civil War propaganda rekindled in my head, leading me to look up again the story of the Fall of Visigothic Spain and in the course of this process to discover the work of a remarkable man - also an exile estranged from the political and religious order of Christian Spain, a modern day Count Julian living in Morocco - the novelist Juan Goytisolo.