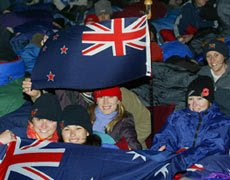 Apparently the kids just can't get enough of that ANZAC spirit

It seems that the executive of the Victoria University Students' Association (VUWSA) has roused its normally phlegmatic membership to a state of apoplexy over their decision not to lay a wreath at last weekend's ANZAC day commemoration service in Wellington.

ANZAC day celebrates the anniversary of the landing of Australian and New Zealand soldiers at Gallipoli as part of the abortive Allied invasion of the Ottoman Empire in 1915. Over 130 000 soldiers from both sides died during the year-long campaign that followed, fought for no other reason than to further the interests of Franco-British as against German/Austro-Hungarian imperialism (the Ottoman Empire being a client state of the latter).

While enthusiasm for ANZAC day declined markedly in New Zealand during the 1960s and 70s (as the post-war generation took up the cause of anti-militarism and progressive social change), recent years have seen an alarming reversal of this trend especially among the younger generation - with thousands of school students now flocking each year to dawn parades around the country and young Kiwis on their OE now increasingly making the secular "pilgrimage" to Gallipoli as some kind of national "rite of passage" (much to the delight of the purveyors of those cringe-inducing Contiki tour packages).

While some left commentators have argued that the renewed enthusiasm for ANZAC Day could represent a desire on the part of a younger generation brought up in an atomised society lacking in mass social movements (either progressive or reactionary) to get a glimpse of something "larger than themselves", and others have claimed it as evidence of the hold of right-wing ideology on the nation's youth, I actually think what the responses to the article on the Salient website show is that most of the students who support ANZAC day (i.e. all apart from the ACT on Campus crowd pursuing their VSM agenda and the Kyle Chapman doppelgänger who posts as "NZ Patriot") are actually operating on a sub-ideological, emotive level.

As I said in an exchange over on Reading the Maps recently:

In some ways I would almost prefer it if the thousands of people from my generation flocking to attend ANZAC day dawn services were actually doing so out of enthusiasm for NZ imperialism - at least that would show they had some political ideas in their heads! But instead all we have is this banal, unthinking vacuousness...

I guess the difficulty stemming from this is that the VUWSA executive is supposed to represent Victoria University students, yet at the same time there is an acute contradiction between the anti-imperialist views of Workers Party members (and WP allies) on the exec and the current miserable level of consciousness among students.

Another problem is that fact that VUWSA has not actually taken a hard anti-imperialist stance on this issue but rather adopted as WP member Don Franks says says an "agnostic" position, of being neither for nor against celebration of the ANZAC invasion of Turkey. Obviously as someone who isn't an active member of WP or studying at Victoria I'm not close enough to these events to know all the details, but I assume that this position was a compromise forced upon the WP exec members who are in the difficult position of being only a minority (albeit a sizable one) on the VUWSA executive.

What all this does highlight though I think are the difficulties inherent in revolutionaries taking on elected political positions in a period where the level of consciousness among students (and workers!) is at all-time historic lows. To be sure, it is necessary to continue to try to do something to reverse the process of de-politicisation but is running for elected political office the best way to do this?

I guess my feeling is that while in national elections it is at least possible to be clear that you are calling for a revolutionary protest vote and stick to your principles, in the world of student politics the very same apathy and de-politicisation that makes it possible for revolutionaries to get elected in the first place can also prove to be your Achilles' heel once you as duly elected representatives try to advance anti-imperialist or socialist politics.
Posted by Fatal Paradox at 1:29 PM